From a field of 20 of the state’s best auctioneers, Cody Lowderman won the judges’ favor at the 32nd Annual Championship Auctioneer Contest on Tuesday, August 17. The showcase of auction talent on stage at the Illinois State Fair is sponsored by the Illinois State Auctioneers Association (ISAA), Farm Credit Services and First Farm Credit Services.

A second generation Auctioneer, Cody is also a partner in the family business of Lowderman Cattle Company, and together with brother, Monte, founded Lowderman Auction Options, an online marketing service. He is a graduate of Michigan State University, Black Hawk College, East Campus and Worldwide College of Auctioneering in Mason City, IA.

Cody is a member of the Illinois State Auctioneers and National Auctioneers Associations, the IL Hereford Association and past president, the American Hereford Association. Licensed in 10 states, Cody is real estate broker and auctioneer of nationwide residential and commercial properties for the Tulsa, Okla. based real estate and brokerage services firm Williams & Williams. He is a member of two National Champion Livestock Judging Teams (IL 4-H and Michigan State University) as well as high individual overall at North American International Livestock Expo Judging Contest (2 years) and high individual overall at the National Western Stock Show Livestock Judging Contest. He has been an official judge for local, state, and national livestock shows, and numerous purebred livestock breeders and association sales across the U.S. He and his wife Abby have two sons Nash and Tuck.

Lowderman went on to sell at the Governor’s Sale of Champions that evening. Past President Cory Craig of Edinburg has served on the Governor’s Sale Committee since it was reorganized in 2005. The sale of commodities was called by the champion and reserve champion. The animals were sold by Past Champions including 2014 Champion Brian Curless of Pittsville who also was named Reserve Champion ot the Livestock marketing Contest, Cory Craig, Alex Belcher, Monte Lowderman and former State Representative Jim Sacia, who is also a licensed auctioneer. Catching the bids were International Ringmen Champion Alex Belcher, and Illinois Champion Ringman Jon Bloomberg.

The Illinois State Auctioneers Association has over 400 members and is recognized as one of the premier auctioneer trade associations in the nation. For the past 15 years Maxine O’Brien of Poynette, WI has served as their chief executive officer and state-approved administrator of the ISAA continuing education program for auctioneer license renewal. 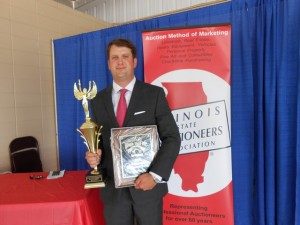